Students With Depression Likely To Drop Out Of School 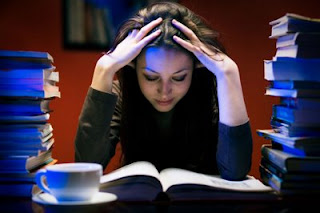 University students with depression are twice as likely as their classmates to drop out of school, new research shows. Not a surprising result, really. Notable, though, was that the depression symptom of loss of interest was directly associated with lower grade point averages and the drop out rate.

I can attest to this. Nearly thirty years ago, I had to take a leave of absence in my second year of university because of depression. And like the trend in the current research, it was when my fatigue and lack of interest surged that I couldn't complete assignments. Then I couldn't make it to classes. And finally I had to take a medical leave to get treatment. I think the only reason I was able to tend to my depression so quickly was that I was a psychology major and recognized the symptoms.
But for the most part, the general population, as well as college age students with depression, do not seek out treatment for their conditions.
"Maybe the biggest reason is only about 50 percent of people with depression say they think they need help," said Dr. David Eisenberg, lead researcher from the University of Michigan. "College students in particular may feel that stress is normal." Stigma walls people in too.

Below is a list provided by All About Depression that describes the various kinds of depressive disorders according to the DSMIV-TR. If you think you are experiencing any of the symptoms below, contact a professional. There's no need to suffer in silence or endure such difficulties.

* Major Depressive Disorder: This illness impairs a person's ability to work, sleep, eat, and function as he or she normally would. It keeps people from enjoying activities that were once pleasurable, and causes them to think about themselves and the world in negative ways. Major depression is often disabling and may occur several times in a person's lifetime. For more information go to Diagnosis: Major Depressive Disorder

* Dysthymic Disorder: A milder yet more enduring type of major depression. People with dysthymia may appear to be chronically mildly depressed to the point that it seems to be a part of their personality. When a person finally seeks treatment for dysthymia, it is not uncommon that he/she has struggled with this condition for a number of years. For more information go to Diagnosis: Dysthymic Disorder

*Bipolar Disorder: Also known as manic-depression or manic-depressive disorder. This condition is characterized by mood that alternates between periods of depression and periods of elation and excitable behavior known as mania (see symptoms below). For people who have bipolar disorder, the depressions can be severe and the mania can seriously impair one's normal judgment. When manic, a person is prone towards reckless and inappropriate behavior such as engaging in wild spending sprees or having promiscuous sex. He or she may not be able to realize the harm of his/her behavior and may even lose touch with reality. For more information go to Diagnosis: Bipolar Disorder

*Mood Disorder Due to a General Medical Condition: Depression may be caused or precipitated by a known or unknown physical medical condition such as hypothyroidism. For more information go to Diagnosis: Mood Disorder Medical

*Substance-Induced Mood Disorder: Depression may be caused or precipitated by the use or abuse of substances such as drugs, alcohol, medications, or toxins. For more information go to Diagnosis: Substance-Induced.

Good post. Kat is bi-polar. And I was amazed she made it through grade 12, but that was over 2 years ago. Now she's finally got a counselor that shes been seeing for over 7 months now. I don't think it helps matters that she's dating one that's even worse than her. Oi....how do we just sit back and let them make mistakes without going crazy ourselves?

Over the years I've gotten to know you and think that you are an amazing Mom. The best we can do is teach our children, plant the seeds that help them grow - and trust that our love and guidance will help them through all the good and bad in life.

Thanks for this really interesting post. I wish when I was studying I had recognised what I know recognise because then I might not have had to take time out in my third year and return for a 4th year when I should have graduated at the end of the 3rd year.

I can't even imagine trying to get through college being as depressed as I was about 18 months ago. Then again, sometimes I don't know how I even got up and went to work. Being a teacher, I would imagine being somewhat similar to a therapist, you can't really check out while doing your job.

Outside pressures and social stigma are definitely things that work against us young'uns.

Thanks for sharing Dr Deb...very insightful :)

i can totally relate to this post. thanks Dr Deb!

I had to change school so I could complete my final year, in a different environment - one which was way more flexible, so I could manage to complete assignments and get reasonable grades, even if I couldn't get out of bed.

And now at university I've already dropped out once, had six months off, and gone back again, and am possibly on the verge off taking a break again. Determination, and the fear of failing keep me coming back.

I am so glad I stopped by tonight. This post hits home in so many ways. My children's father is bi-polar. Their step mother was bi-polar and completed suicide in 2004. I have lived with depression most of my life as well as being an incest survivor. My oldest daughter has an anxiety disorder and depression plagues her as well. That was quite a list just to say I appreciate this space and you so very much. I have spent years and years learning about depression in all it's forms and you teach me so much through this place of yours. I am most grateful. My best to you and yours dear Deb.

It's difficult, in that post-adolescent (barely) college stage of life, to know what is "normal" and what might be signs of depression. Not to mention the bouts of spring fever. Interesting post, Dr. Deb.

Thank you for your candor and the information, as always, dear friend.

I can attest to this first hand as well. It's a shame that I never went back, but I think there were so many things (outside influences) that needed to be dealt with so that I could be healthy. So for that, I wouldn't trade.

PMS still strikes me, though a little less since having my second child. More discomfort and the irritability that is associated with that (much like being sick).

This is very imformative. I suffered from major depression during my college years. I was almost expelled because my grades were poor due to lack of concentration. So I knew then something had to be done!

I was so sadden when my youngest dropped out of school. I am so glad he is in treatment for depression now.

That one's no surprise, right?

I wonder if they have the statistics as to how many students drop out of high schools (inner city where the drop out rates are sky rocketing)and college due to depression...

As always a very interesting read Deb, and enjoy the summer.

I bet this is HUGE! I'm surprised I finished my undergraduate degree, really. I dealt with a lot of depression. I don't think, back in college, however, that I knew what it was I was dealing with.

Fortunately, my financial situation was so precarious, I had to hurry up and finish!

it is hard to work when you are depressed

Interesting post, and I can relate to it first hand. I was diagnosed with depression halfway through my first semester at university. Now almost 2 years on, I've somehow stayed on my course, but at the expense of my grades, which dropped at average of 20%, including failing 2 modules at the end of this year. Several times I have debated whether I should stay, but apparently I'm not a quitter, because I'm going back again in September. I just wonder how I will keep myself going again this year as my motivation plummets.