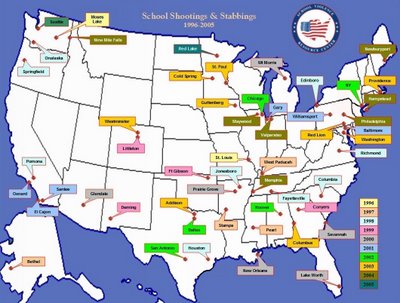 This is a map of school violence in the United States between the year 1996-2005. I saw this first from my blogpal, Renee

Below are just a few examples of where this has happened in the world in the last ten years...

1996 - Dunblane, Scotland: Sixteen children and a teacher are killed by a shooter who then takes his own life.

1997 – Seven Israeli school girls were shot to death by a Jordanian soldier while on a field trip in Bakura.

1998 – A bombing in Algiers on a crowded street packed with students returning home from school killed one person and wounded several others.

1999 – An individual with extremist views opened fire in a childcare area of a Jewish community center in Los Angeles and killed several children.

1999- Two Columbine High School students went on a killing rampage, murdering 12 fellow students and a teacher, as well as wounding 24 others, before committing suicide.

2002 – Two students were murdered and fifteen wounded by a gunman believed to be from an ethnic minority Karen rebel group in an attack on a school bus in Thailand .

2002 - Fourteen teachers, two students, one policeman were shot and killed at a school in Erfurt, Germany. The gunman later committed suicide.

2004 - A group of heavily armed rebel extremists stormed into School No. 1 in Beslan, Russia. The siege ended with a series of explosions and gunfire that killed over 350 people - half of them children.

2006- Montreal Canada. A hail of gunfire occurred at Dawson College which killed one student, seriously injuring19 others. The gunman committed suicide .

2006 - In one-room Amish schoolhouse, a heavily armed truck driver shooting all ten girls, and them himself. Five young girls lost their lives, and five cling to life.

What can be done to minimize such violence?